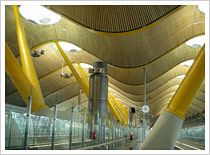 The Adolfo Suárez Madrid-Barajas airport is located 12 kilometres outside of the city of Madrid. There are four terminals that are recognized as T1, T2, T3 and T4. Terminals 1, 2 and 3 are home to Sky Team, Star Alliance and Air Europa member airlines. Terminal 4 hosts Iberia Airlines and One World affiliates.

The airport can be reached in many different ways: 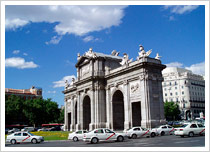 Taking a taxi from Madrid to the Airport, or vice-versa, is a painless way of getting from one place to the other. It can be expensive and you need to be able to communicate where you are going (if leaving the airport). To hire a cab simply walk outside the terminal and wait in the established line. The cab drivers legally add a 5 € fee for all trips to and from the airport. If you choose to take a taxi ask for a receipt (un recibo) when you get in the cab to make sure the driver doesn't overcharge you. The cost of a taxi from central Madrid to Barajas, or Barajas to central Madrid is approximately 30-35 €. 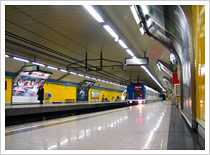 You can travel to and from the airport by metro by taking the metro line 8 that runs from Nuevos Ministerios to Aeropuerto T1 T2 T3 and Aeropuerto T4. Remember, the metro only operates between the hours of 06:00 and 01:30.

Getting to the airport by bus can be accomplished either:

From the airport take either:

Remember, the bus system only operates between the hours of 06:00am and 11:00pm.